While the European unicorns are well-known, there’s more than meets the eye to this magical unicorn species. That’s why we’re going to explore a bit deeper and ask our dear unicorn friend, Hippolyta, what does she know about her own species.

Hippolyta, Where in the World Do European Unicorns Live?

As you can probably tell, we live in Europe. Many of us, including myself, live in Scotland. Other parts of Great Britain have a significant unicorn population as well. I also have many relatives in Germany, France and Italy.

Yes, I would say most of us live in the Western and Central Europe. But you can find European unicorns across Europe, even in Northern Europe.

Oh my, that’s what people think, isn’t it? Most European unicorns have a white coat, indeed, and a white mane and tail. But not all of us are white. As you can see, my coat is light brown, although my mane and tail are white.

I suppose it’s the European blood that makes so many of us white with blue eyes. But as you see, my eyes are purple. We don’t all look the same, you know.

We have. But it’s not like humans always knew how we look, is it? In Europe, the first rumors about unicorns spread in Ancient Greece. A Greek man, Ctesias, found out about unicorns.

He was correct about the fact that many unicorns have a white body and blue eyes, but he also claimed we have dark red heads! Can you imagine?

In medieval Europe, humans made unicorns look a bit silly in the art they made, if you want my honest opinion. In some of those paintings, unicorns look like goats! For some reason, people thought unicorns have curly beards, like goats.

I suppose a mild weather is the best for us, since most of us have settled in Western and Central Europe. Some of us do live in Northern Europe, though.

Forests, moors and mountains are ideal habitats for European unicorns. Harz mountains in Germany is one of the most popular unicorn habitats in Europe. We like to live near waterfalls and in lush spruce forests. 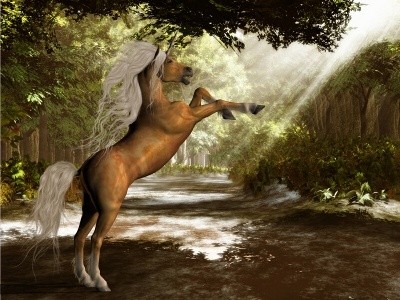 Hippolyta, Do You Have Any Magical Powers?

Of course, I do, I’m a unicorn! Like all European unicorns, I can cry healing tears, but unicorns hardly ever cry. I can purify water and heal the sick with my horn.

But it’s not like unicorn horns heal anything, if it’s just a horn and no unicorn, you know?

Humans can be so silly, they have always thought unicorn horns are some sort of healing objects. But unicorn horns have no magic without the unicorn!

I can also grant wishes, but I consider carefully if I’ll choose to grant someone’s a wish or not.

Unicorn blood is healing too. But if you kill a unicorn to get our blood, you’ll be cursed forever, because you killed something so innocent. So I suggest you forget about that.

Thank You for Your Kind Answers, Hippolyta.

I hope Hippolyta’s answers have helped you understand the most common unicorn species, the European unicorn. This is how we imagine unicorns; a beautiful horse-like magical creature with a white coat. But like Hippolyta, all European unicorns are not white, although most of them are.

They rarely show themselves to humans, and they live in lush forests, on mountains and on moors. They have many magical powers, like the ability to purify water and heal the sick with their horn, granting wishes and crying healing tears.

If you have any questions about the European unicorns you’d like to ask Hippolyta, feel free to leave them in the comment section below!

8 thoughts on “European Unicorns – The Most Common Unicorn Species”