Have you heard of the Church of the Invisible Pink Unicorn (IPU)? The name “church” is misleading, though, because it is not really a church. It is a parody religion founded by a group of atheists. The IPU mostly takes action on the internet. No real unicorn worship, then? I’m afraid not.

Let´s have a closer look at this strange movement. Who founded the IPU and what is it all about?

The IPU even has its own manifesto, a belief system and testimonials by her “followers”. There are other movements similar to the IPU. Finally, does the IPU parody work, or is it turning against itself?

What Is the Church of the Invisible Pink Unicorn?

Because of the invisibility, no one can prove IPU doesn’t exist. This satirizes theistic beliefs about God. While no one can prove God exists, there is no proof of his non-existence either, because you can´t see the God.

By replacing the word ´God´ in any theistic dogma with the ´Invisible Pink Unicorn´, the advocates of IPU are trying to prove how irrational these dogmas are.

From 1994 to 1995, a group of college students on the ISCA Telnet-based BBS developed the idea further. They created a manifesto for this parody religion.

“Blessed Be Her Holy Hooves” and Other IPU Quotes

Blessed Be Her Holy Hooves.

Another epithet for the IPU

Yet another epithet for “Blessed Be Her Holy Hooves”

Invisible pink unicorns are beings of great spiritual power. We know this because they are capable of being invisible and pink at the same time.

Like all religions, the Faith of the Invisible Pink Unicorns is based upon both logic and faith. We have faith that they are pink; we logically know that they are invisible because we can´t see them.

I was driving home with just a half tank of gas, which was not nearly enough for the distance. Because I had no money for gas, I decided to pray for the IPU for help.

Her Holiness worked in mysterious ways by creating a strong wind up the central valley, which incidentally brought large amounts of rain. This tail wind improved my gas mileage just enough for me to reach my driveway.

The wind apparently caused widespread flooding down the entire valley, but I suspect the people who got flooded were unbelievers living contrary to the laws of the Great Invisible Pink Unicorn.

An IPU “follower´s” testimonial on the Rationalwiki

We believe in one Unicorn, The Pink, The Invisible.

Part of the creed of the IPU

Just because you haven´t seen a unicorn doesn’t mean they don´t exist. I haven’t seen quarks, electrons, or Peter Murphy for that matter, but I still accept their existence even though I have no direct evidence for their existence.

Unicorns are special creatures which exist seemingly in the imagination but there isn’t any reason they can´t exist. Horses with horns in their foreheads who can only be approached by virgins are perfectly logical, their existence has not been confirmed yet.

Rich Daniel, “the grand high llama” of the IPU

Other Beliefs About the Invisible Pink Unicorn

Some people claim the Invisible Pink Unicorn may show herself to true believers, but remains invisible to unbelievers.

If you find a hole in your sock, it is a sign that the Invisible Pink Unicorn has pierced it with her holy horn.

It is also a good sign if you open the washing machine, and the whole wash has got dyed pink. This means Her Pinkness has taken a ride in the spinning laundry, making love with one of her chosen Stallions.

All holy days of other religions are also holy days of the Invisible Pink Unicorn. The holiest day of the year is the 1st of April.

42 is a significant number for the followers of the IPU. That is because in Douglas Adams´ book Hitchhiker´s Guide to the Galaxy, the answer to the question “what is the meaning of life, the universe, and everything?” is 42.

On the other hand, some “followers” of the IPU claim she is a vegetarian. If that is the case, IPU likes neither pepperoni and mushroom pizza or pineapple and ham pizza.

The IPU logo portraits a mathematical void symbol and a unicorn. The void symbol refers to nothingness; there is no faith and no god. It has become the symbol of atheism. Some atheists wear necklaces with the IPU symbol and some even have it tattooed on their skin. The logo was created in 2013 by Tim Ahrentløv.

The logo is copyrighted, but it is allowed to represent it as a symbol of atheism. It is meant to be a symbol of friendly atheism. 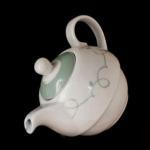 The philosopher Bertrand Russell made a teapot analogy. If he would claim without any proof, that a teapot orbits the Sun between the Earth and Mars, he should not expect anyone to believe his claim. Even though no one could prove there was no teapot in space, he would have to be the one who proves his claim.

The Church of the Flying Spaghetti Monster

The Church of the Invisible Pink Unicorn – Is Atheism Turning Against Itself?

I´m a big fan of parodies and satires. Anything can be parodied, and it´s fine by me. But does the IPU parody work?

The thing is, though, should faith even be logical? Faith is about trusting and believing, even when there is no proof of something. It is not about logical thinking.

Is there anything wrong with just believing, then? In my opinion, there is not, whether you believe in God or unicorns. Not everything can be seen with eyes. The problem is that something that cannot be proven or explained with logic, is being attempted to be explained with reason and logic. This is where many religions, as well as atheism, fail. Atheists want proof and logic, but religions are also trying to give proof and logic to their beliefs.

In its own absoluteness, atheism is becoming a sort of religion itself. Religions, on the other hand, are adopting the ideas of atheism by trying to prove their beliefs with logic. What I don´t understand is, why try to prove something uncertain to be certain?

What also distracts me about atheism is, that it seems as if the only options would be to be a Christian or to be an atheist. Even if the options would be expanded to practicing any religion or being an atheist, those are far too limited categories for the diversity of spiritual worldviews.

It never seems to be mentioned there are other variations too, like being spiritual but not practicing a specific religion. Believing in unicorns, even! Is this where the Invisible Pink Unicorn comes in? Not exactly, unless some people actually find spirituality in this pink little unicorn goddess.

Because there is one more thing the founders of IPU did not take into account. While the atheists founded IPU as a parody religion with the sole purpose to satirize theistic beliefs, how can they be sure it won´t become a “real” religion over time?

Just because it started as a parody, it does not mean someone could not actually start believing in the Invisible Pink Unicorn. After all, she is a unicorn. And the mystery of disappeared socks would finally get an explanation!

Unicorn Worship or a Parody?

Today´s post went a little bit deep. But what else to expect when you write about an atheistic parody religion, of which “followers” worship an invisible pink unicorn goddess? It was an interesting journey exploring this phenomenon, though. I hope it was for you as well.

Founded by a group of atheists in the 1990s, the Church of the Invisible Pink Unicorn has become an internet phenomenon and fake religion with its sole purpose to satirize theistic beliefs. The “goddess”, Invisible Pink Unicorn is a contradictory character because of her claimed pinkness; how can you know she´s pink if she is invisible?

In order to satirize religions, the IPU mimics characteristics of established religions. The IPU has its own manifesto, testimonials, and holy days.

The IPU even explains the mystery of socks gone missing in laundry; the Invisible Pink Unicorn has taken them. The IPU logo has become a symbol of atheism.

The IPU is a clever and funny parody religion, but the flaws of atheism become flaws of the Church of the Invisible Pink Unicorn too. Atheists seem to adore logic too much, and religions are falling into the same trap. Trying to explain the inexplicable with logic and reason is doomed to fail.

I did find an excellent quote by Rich Daniel, “the grand high llama” of the IPU. Actually, this is the best quote I’ve heard for a while, and I can feel some true unicorn spirit in his words!

The IPU doesn’t make logical sense, but neither do the laws of physics. They make sense to cult members who undergo a lengthy initiation, namely physicists.

Nothing in the universe makes sense, the IPU is merely the first being to be honest about it. The universe just is, only logic makes us act in strange ways.

Logic is what starts wars, causes misery, starts famine and makes a really bad cup of tea. Rejecting logic is the first step to enlightenment.

Logic is what tells you to cut your hair, buy sensible shoes, that your aspirations in life are a BMW, things from The Sharper Image catalog, and that wearing velvet, lace and lots of mascara is a silly idea.

Now, that is something I wanted to hear; everything that is logical is not good, and all illogical things are not bad. Are unicorns even logical, after all? Of course not, even if they´re not the pink and invisible ones. But they sure make life much happier!

I´d love to read your thought about the Church of the Invisible Pink Unicorn. Do you think their parody works? Why, or why not? Which one of their beliefs is your favorite, or which one do you find the funniest?